QUEEN Constantine and Gaia Boni kicked off 2020 nicely for us with victory in 1m3f fillies handicap.  Gaia gave her a very confident ride; held her up off the pace in third until making headway 7 furlongs out and closed on leader over  2 furlongs out.  They took the lead in the final 2 furlongs and stayed on well to win by  a furlong.

Delighted to have a January winner and so pleased for Kevin and Jo Hickman; Queen Constantine is a tough filly who will be an asset to their Valachi Downs Stud in New Zealand when her racing career is over.  Queen Constantine has an entry at Lingfield on Saturday in an apprentice race and will again be partnered by Gaia.

On Tuesday we have Hindaam running for the first time since joining us from the Tattersalls December Mares Sale.  She has settled in well and is working nicely and I think she has a decent each way chance at Kempton where she has a fair draw and is partnered by Keiren Shoemark.  She will improve for the run but I feel she will be competitive on Tuesday.

Very exciting news is that on Sunday 2nd February Mrs Gallagher gave birth to a filly foal by Dark Angel – mother and baby are doing well! 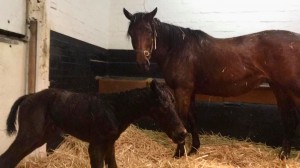 Mrs Gallagher and her baby 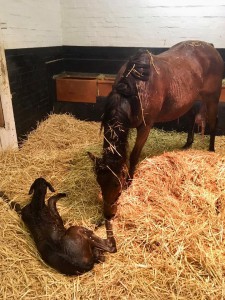