IT’S been a quiet couple of weeks for the Phantom House but with Knight Errant’s good win at Sandown this afternoon we’re back with a bang.

Partnered by Silvestre De Sousa, they tracked the leading pair Enzemble and Whitlock.  Knight Errant was shaken up two furlongs out and closed up the inner rail with over a furlong to go; he was driven ahead in the last 150 yards.  Knight Errant stayed on well and was victorious by three-quarters of a length.

William said “What a brave performance, he put his poor run at Goodwood well behind him.  He is a very progressive horse and Sylvestre gave him a great ride.  I was delighted that owner Rupert Villers was able to be there to cheer him home.” 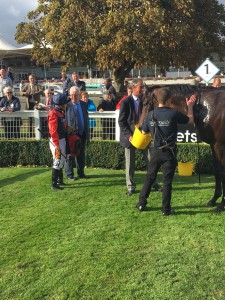